Robotic process automation (RPA) software revenue grew 63.1% in 2018 to 846 million dollar, making it the fastest-growing segment of the global enterprise software market, according to research firm Gartner. RPA software revenue is expected to reach $1.3 billion in 2019. “The RPA market has grown since our last forecast, driven by digital business demands as organisations look for ‘straight-through’ processing,” said Fabrizio Biscotti, research VP at Gartner. 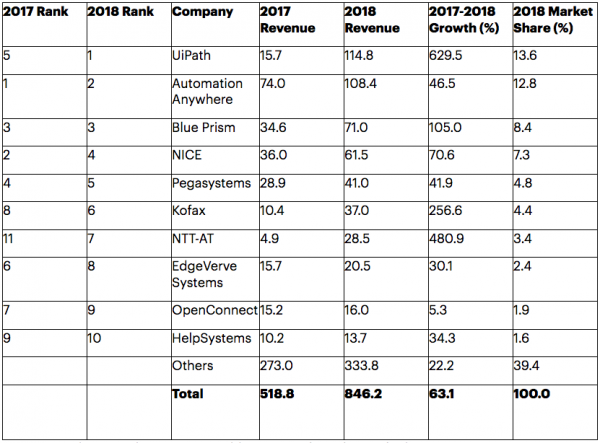 RPA software market share by revenue, worldwide (millions of dollars). Due to rounding, numbers may not add up precisely. Source: Gartner, June 2019

North America continued to dominate the market, with a 51% share in 2018, but its share dropped by 2 percentage points year over year. Western Europe held the No. 2 position, with a 23% share. Japan came third, with adoption growth of 124% in 2018. “This shows that RPA software is appealing to organisations across the world, due to its quicker deployment cycle times, compared with other options such as business process management platforms and business process outsourcing,” said Mr. Biscotti.

Although RPA software can be found in all industries, the biggest adopters are banks, insurance companies, telcos and utility companies, that traditionally have many legacy systems and choose RPA solutions to ensure integration functionality. “The ability to integrate legacy systems is the key driver for RPA projects. By using this technology, organisations can quickly accelerate their digital transformation initiatives, while unlocking the value associated with past technology investments,” said Mr. Biscotti.

Gartner expects the RPA software market to look very different three years from now. Large software companies, such as IBM, Microsoft and SAP, are partnering with or acquiring RPA software providers, which means they are increasing the awareness and traction of RPA software in their sizable customer bases. At the same time, new vendors are seizing the opportunity to adapt traditional RPA capabilities for digital business demands, such as event stream processing and real-time analytics.

“This is an exciting time for RPA vendors,” said Mr. Biscotti. “However, the current top players will face increasing competition, as new entrants will continue to enter a market whose fast evolution is blurring the lines, distinguishing RPA from other automation technologies, such as optical character recognition and artificial intelligence.”

By using this website you accept that we track your interaction to offer you a better user experience. More...
Go to Top